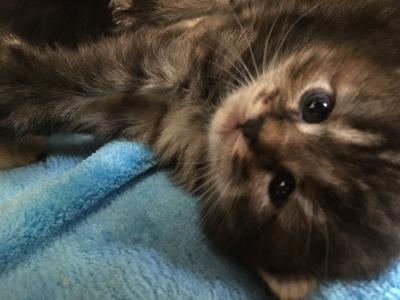 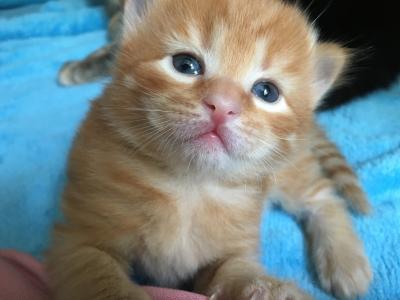 Several proteins play a role in cat allergies. The protein that most commonly causes allergies in people is called Fel-d1. Fel-d1 is primarily found in cat saliva, though dander and fur can also become allergenic when the cat grooms itself. Fel-d1 levels vary between individual cats, though the Siberian cat breed as a whole has a much lower average than other breeds (earning it the title “hypoallergenic”).

Fel-d1 is measured on a scale of 0 to up to 34 mcg, according to Lundberg’s research. Cats (of all breeds) average 4-7 mcg, while Siberians average 3 mcg. We selected Junipurr and Kiska because their Fel-d1 levels are below even the Siberian average—2.1 mcg and 0.7 mcg, respectively. Junipurr’s beau, Romeow of White’s Farm, is a 0.7 mcg.

Though Fel-d1 is the protein that is most commonly the cause of cat allergies, there are other Fel-d proteins. Research suggests that Fel-d4 can also cause allergies in some people (an allergy to Fel-d4 is associated with an allergic reaction to horses). However, a reaction to Fel-d4 is far less common than to Fel-d1.

The best way to know for sure whether you will react to a particular Siberian kitten is to spend some time with her. You know, if you have a cat allergy, that you will be able to determine pretty quickly if you are reacting! If one cat doesn’t work out, try another one after your allergy symptoms have fully subsided. For more information, check out Tom Lundberg’s website.